When and why do you have to replace your anode?

Anodes are there to protect our props from electrolysis.
Saltwater tends to speed up the process of electrolysis, which is why awareness of this subject is important to every boat owner.

Electrolysis is not associated with only one propeller brand. It happens to every propeller, regardless the manufacturer.

There are some steps to be taken in order to protect your propeller and prolong its lifespan.

Why do you even have to replace yur anode?

Having an anode installed on your propeller, is a vital step for keeping electrolysis at bay.

Saltwater is current conducting. A “battery” will automatically be created when 2 different metals connected to each other, e.g. a propeller, is placed in the water. The current flowing between the two metals will try to equalize the conductivity of the metals, which will result in removal of metal from one of the connected pieces. This process is what’s called “electrolysis”.

The most common cause of electrolysis is stray current. Some docks are well known for their defective or poor shore power connections. Common problems are found in the electrical installations, inadequately wiring or the ground lead not being connected to ground. Stray current easily causes electrolysis damaging the propeller, as the propeller has the best electrical connection into the water.

For that reason, it’s a good investment to install an anode to your propeller. Anodes don’t protect fully against electrolysis, but their key function is to keep electrolysis at bay for as long as possible. They take on a sacrificial role, so to speak.

Another common cause can be the electrical installation on your own boat or even the neighbor boat. Current can easily travel from a boat being several spaces away from you in the marina.

When to replace your anode

You can’t put an exact timeline on when to replace the anode, but here’s a guideline on how to spot electrolysis and when to react.

Key points in relation to the anode:

Signs of electrolysis on the propeller blades: 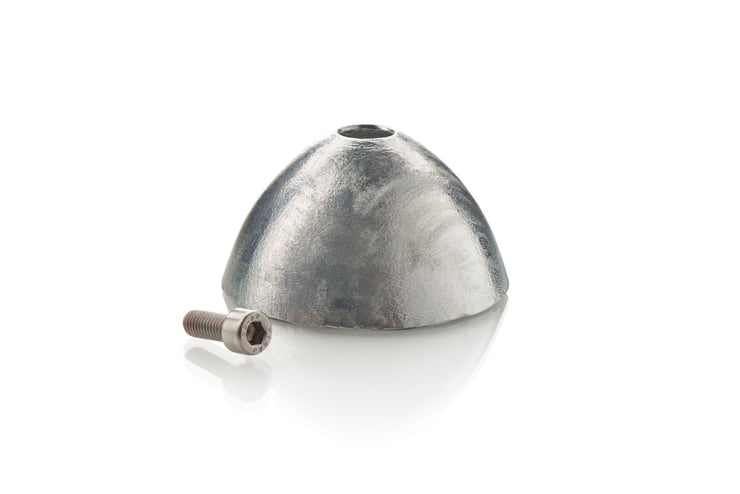 First step in protecting your propeller is to install a sacrificial anode.

Anodes are one of the easiest components to replace. You can even replace it under water on Flexofold propellers, so you won’t even have to haul out your boat.

Replacing an anode with a new one isn’t complicated either, so you’d have the job done pretty quickly.

The key is to keep an eye on your propeller regularly, namely the anode which you have to properly maintain. The anode plays a vital role in protecting your propeller, so that you won’t have to go out and buy a whole new one. A new propeller is indeed an expensive cost, contrary the very inexpensive anode.

How an anode can protect your propeller from electrolysis

Sacrificial anodes are intended to protect the propeller blades and the hub from electrolysis, as electrolysis will be more aggressive on the anode due to its material. Most anodes are made from zinc and some made from aluminum.

Since zinc and aluminum has a higher voltage in water, the current will be more disposed to run through the anode than from your propeller. That is if you properly maintain the anode, meaning replacing it when needed.

The anode material is more electrically active than the propeller material. When for example stray current is going on, the anode will give up electrons to the other metals (the blades, hub) and slowly start to dissolve, while preserving the propeller. That’s why they’re called sacrificial anodes, as they sacrifice themselves while protecting the propeller.

Once your anode has been affected to a certain degree it can’t uphold the sacrificial role anymore, and your propeller blades will be affected.

If you take a look at the photo below, you see how electrolysis has affected the anodes and blades.

These propellers and anodes have been sailing for the same amount of time, during the same season and same the year. Then how are they so different from each other?

They haven’t been docking at the same marinas or been among the same boats.

It all comes down to the stray current and electrical installations on board, either on their own or a neighbor boat. 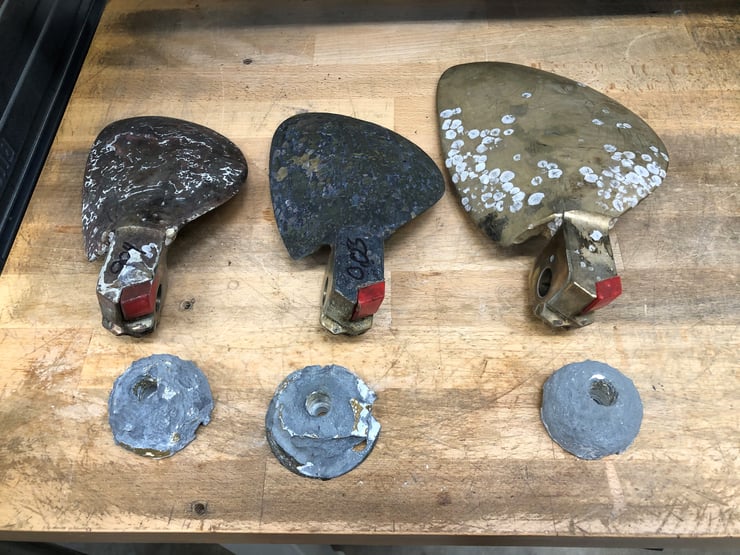 As you can see, the 2 anodes from the left have lost their original rounded shape. The second blade doesn’t look good either. The anode in the middle should have been replaced with a new one way earlier than this stage. The blade has changed its color, and the anode is about 60% gone, as there’s also a hole on the right-side bottom. Stray current has been an ongoing problem for this blade hence the black color, but the green spots indicate, that the process has started recently. There could be an electrical issue on the boat, and the reason for electrolysis may not only be found in stray current.

The color of the first blade from the left still has much of its original color, and the surface is intact. Here you can see that the electrolysis has been more aggressive on the anode than the blade. The anode is about 50% gone. The intent of the anode protecting the blade has succeeded. Still, now is the time to replace the anode with a new one due to the change of shape and 50% of it being gone. If not changing the anode, the blade might end up in a condition looking like the blade in the middle. This would of course depend on where the boat would be docking and the source of the current.

If the source is a less aggressive stray current, and the boat is only docking a few days, it might take longer until the blade would be affected and change shape and color. On the other hand, you never know how fast and aggressively electrolysis is affecting the propeller, so you can’t measure the possible damages in days, weeks or years.

Looking at the 3rd blade and anode from the left, these are good examples of the anode protecting the blade form electrolysis. The anode still has its original shape, and the blade just needs a normal cleaning. The blade has its original color, and the surface is as good as new. This anode has done its job. Looking at the photo below, you can see that the anode is slowly starting to change shape in the top. It wouldn’t be long until you’d need to replace the anode, to keep the blade in this good condition.

The difference between zinc anodes and aluminum anodes

First of all, it depends on where you sail. Is it in saltwater, freshwater or brackish water?

Zinc anodes are used in saltwater only, as it won’t be able to uphold the sacrificial role in fresh or brackish water. Zinc has been the traditional choice for many years, particularly in the maritime industry. It comes in all sizes and shapes. They erode more evenly than aluminum. In some marinas the stray current is so bad that the anode needs a certain structural composition and density. Zink anodes provides a remarkably better impact strength than other anodes in those kind of marinas, exactly because of their structural composition and density.

Aluminum: aluminum anodes are used in freshwater and brackish water. It can also work in saltwater, but zinc protects better in saltwater, especially if you dock at many different marinas or marinas with bad stray current. Aluminum dissolves slower than zinc. However you will notice visible “craters” as it erodes unevenly.

Good quality propellers are an expensive cost, and therefore also meant to last long. When we spend a lot of money on quality, we want the value that the cost represents. However, there are some factors, like stray current, that makes it necessary to protect the propeller. On Flexofold propellers it’s very easy to replace the anode, due to the very simple propeller construction. You can even do it under water, if you’re up for a swim.

Anodes aren’t expensive, so it’s definitely worth the effort.

When and why do you have to replace your anode?

2-blade, 3-blade or 4-blade folding propeller – what should you choose for your sailboat?